Nika was competing on her only forth $25.000 tournament, where she came from qualification to her first final, which is her best result of career.

With two wins she qualified into the main draw. In first two round of the main draw she beat 5th seeded Italian player Gaia Sanesi (WTA 372) and Swiss player Lisa Sabino (WTA 502) in the next round.

In semifinal she eliminated Camila Scala (WTA 445) in straight sets, which led her to her first final on tournament with such prize money.

In final she faced 28 years old, experienced dutch player Arantxa Rus (WTA 104), who a few years ago, already got into 3rd and 4th round of Wimbledon and Roland Garros, where she beat the best players in the world. Her career high ranking on WTA was 61.

In the first set Nika took the lead and won 6:4. Second and third set she lost 6:4 6:1, but although she lost, it is a great result for Nika.

Nika also competed in her first doubles on $25.000 tournament, where she won with Veronika Erjavec, every match without dropping a set. In final they won Martina Caregaro (ITA) and Lisa Sabino (SUI) and celebrated their first win.

For more photos go to gallery. 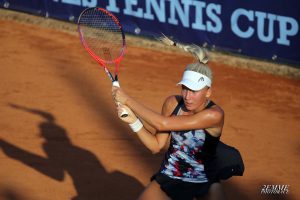 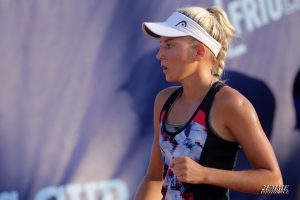 1Nika in top eight to compete in HamburgDoubles semifinal in Prague