From qualification to semifinal

You are here: Home / News / From qualification to semifinal

This week Nika competed on a strong tournament in Budapest (15.000 USD), where she reached semifinal as the first seeded player in qualification.

In first two rounds of qualification she beat Ema Vasic from Serbia and Ludmila Kareisova from Czech Republic.

In the main draw Nika played against second seeded player of the tournament Seone Mendez (WTA 562) and won with the score 63 63. This year Mendez won already three tournaments with the same prize money.

In the second round she played against Slovakian player Katarina Kuzmova. This was their second head to head match, in both Nika was better. This time with result 63 36 62.

In the quarterfinal she beat Japanese Satsuki Takamura 61 60 in only one hour and advanced to semifinal where she lost against Chantal Skamlova (WTA 602) from Slovakia. Skamlova won their first head to head match with the score 63 62. In 2017 Skamlova was already 218th on WTA rankings, which gave her a chance to compete in qualification of US Open. 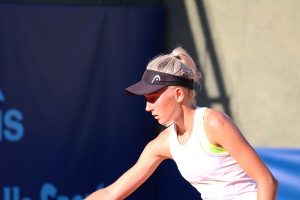 1Nika retired in quarterfinal of Banja LukaNika in second round of $25.000 tournament