You are here: Home / News / Nika to the quarterfinal in Heraklion and final in doubles

After three weeks, Nika returned home from Heraklion (Greece) where she was competing on $15.000 tournaments.

On the first tournament, she played first round against Nina Stadler (WTA 598) from Switzerland and won 6:1 7:5. In second round she defeated Italian player Melania Delai (WTA 637) with score 6:4 6:3. Her quarterfinal opponent was Romanian Alexandra Cadantu (WTA 267) who was already 59th player in the world. Nika lost 6:1 6:1.

In doubles she was partnering Ioana Gaspar from Romania and together they reached semifinals.

In second week’s first round she played against Alexandra Cadantu once again and after two hours she lost 6:2 6:4.

In the same week she was also competing in doubles with her partner Johana Markova from Czech Republic. Together they reached the final where they lost 6:0 6:4.

Last week wasn’t very lucky for Nika. In the first round she faced Nicole Khirin (WTA 1152) from Israel and after the result 6:2 3:6 1:4 she had to retire due to pain in quadriceps and consequently had to retire doubles as well, where she was supposed to play with Gergana Topalova from Bulgaria. 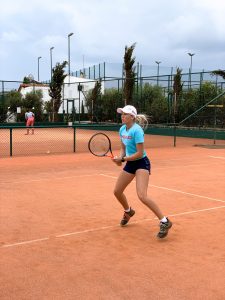 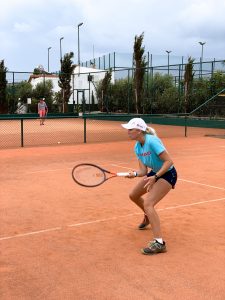 0To the final in doubles